Tracy Morgan is a stand up comedian, cast member on the hit series 30 Rock, past Saturday Night Live cast member and all around funny dude. He’s also in the 2008 movie “First Sunday” with Ice Cube. You can watch the trailer here.

Tracy Morgan is currently touring the United States with his “Tracy Morgan: Picking Up The Pieces” tour (Click link for tickets). The first show kicks off on February 5th in Hammond, IN with the last stop being in San Diego, CA on October 20th. Other notable stops on the tour will be Kahului, HI, Las Vegas NV., and Washington, DC. More dates will be added as the tour continues. Click here to see all dates currently scheduled.

On June 7th 2014, a car crash on the New Jersey Turnpike left Tracy Morgan in critical condition and took the life of his close friend James McNair. Two months later, Tracy was still going through rehab, and undergoing therapy for injuries sustained during the crash.

Apart from being a stand-out cast member on Saturday Night Live, Tracy Morgan contributed to the hilarious Comedy Central (and now MTV) series named Crank Yankers. Tracy plays a character from the inner city named Spoonie Luv. Check out more about Spoonie Luv from up above here.

Tracy Morgan starred on the hit TV series 30 Rock with former SNL cast member Tina Fey. Tracy plays an almost-crazy (ironic?) TV star named Tracy Jordan. Tina Fey’s carachter Liz Lemon spends  most of her time trying to keep Tracy Jordan out of trouble and on track.  Seeing that 30 Rock is loosely based on the backstage antics at Saturday Night Live, it’s a wonder that Tracy’s character has a different last name at all.

Tracy Morgan in Past News:

The guy just wants to be funny. So why does comic Tracy Morgan often think that he’s tiptoeing through a minefield?

One thing he knows for certain: he hates the feeling. He may be proudly black, but he doesn’t want anyone telling him that jokes about race are out of bounds or that it’s wrong to be funny about religion or even mental illness.

Morgan is moving past divorce, DUI

Funnyman Tracy Morgan has had a rough couple of years. In 2007 his wife of 22 years filed for divorce, citing his alcoholism, and a female DJ in Miami filed a complaint saying he groped her in a radio studio. In 2006 he was arrested for DUI for the second time in as many years and had to wear a court-mandated alcohol monitoring device on his ankle. Morgan says he hopes this year will be better. He has a girlfriend. The eldest of his three kids is in college. He’s returning to his stand-up roots as the writers strike continues… Continue Reading

Actor and comedian Tracy Morgan is a mama’s boy

It was evident from his phone interview last Tuesday when he paused the conversation for a moment. Sure enough, Mom was on the other line. Tracy Morgan, who will be performing at McCurdy’s Comedy Theater and Humor Institute next weekend, said he’s a family man at heart. A homebody who likes nothing more but to relax. “Just being with my kids, being with my lady, hanging out at home,” he said, calling from his home. “I don’t like doing anything else. Just hanging out at home, playing with my snake, feeding my fish.” Yes, you heard right. Morgan owns a pet snake.

“I have a Red Tail Columbian Boa,” said the former “Saturday Night Live” star. “She’s beautiful too. She’s like six-feet long. Had her since she was a baby.” Be assured that Morgan’s precious boa won’t be making the trek with him to McCurdy’s for his four performances on Friday and Saturday, but hopefully his sense of humor will. “I look forward to coming in here and rocking,” he said. “I’m excited.” Don’t expect the “30 Rock” celebrity to do any of his famous “SNL” skits, though — no Brian Fellow or Astronaut Jones… Continue Reading

Tracy Morgan is in a record warehouse in Los Angeles, explaining in a loud and playful voice what he’s buying.

The former “Saturday Night Live” star has a reputation for being, to drop one of his favorite words, hilarious. This is a guy who’s famous for playing Astronaut Jones, a lusty space explorer, and Brian Fellow, a TV animal-show host who’s as loopy as he is uninformed.

from the Detroit Free Press.

Morgan will play a self-confident comedy star in the project, set behind the scenes of “Friday Night Bits,” an “SNL”-type show.

Comedian-actor-writer-producer Tracy Morgan is trying to put the emphasis back on the first part of his multitalent hyphenate. Made famous by a successful 1996-2003 run on NBC’s comedy institution, Saturday Night Live, Morgan is returning to stand-up, where he got his start more than a decade ago. On SNL, Morgan stood out with a string of silly and slightly bent characters like Astronaut Jones, Dominican Lou, Woodrow the homeless guy and the enthusiastic and glossy-lipped animal lover Brian Fellow. He’s also appeared in such films as How High and last summer’s The Longest Yard, and was immortalized as a puppet called Spoonie Luv on the late night Comedy Central prank phone-call series, Crank Yankers. Shows are 7 p.m. and 10 p.m. At the Magic Bag, 22920 Woodward Ave., Ferndale; 248-544-3030. 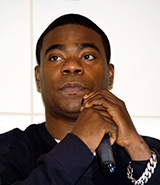