Tracy Morgan has played many hilarious characters mostly as a cast member of Saturday Night Live (SNL.) Listed below are some his most memorable:

Astronaut Jones – A character in a skit from SNL where Tracy Morgan plays a cheezy lounge singer in a low budget and equally cheezy variety show.

Brian Fellow’s Safari Planet – Another skit from Saturday Night Live, Brian Fellow is not an accredited zoologist, nor does he hold an advanced degree in any of the environmental sciences. He is simply an enthusiastic young man with a sixth grade education and an abiding love for all of God’s creatures.

Dominican Lou – Yet another great character from SNL: The building superintendent at 1901 Burnside Avenue in the Bronx.

Spoonie Luv – One of Yankerville’s puppet citizens who refers to himself as “Spoonie Luv from up above.”

Uncle Jemima – Last but certainly not least, a skit character on SNL who is the antithesis to his “wife” Aunt Jemima the pancake lady. 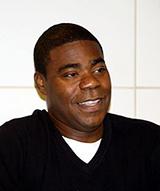